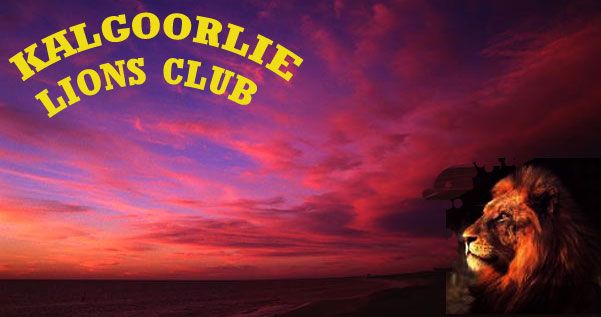 Welcome to the Lions Club of Kalgoorlie in Western Australia

The Kalgoorlie Lions Club was Chartered on 1st June 1967. Current membership includes both men and women, with ages ranging from 18 to the 80s.

We are the proud operators of the Kalgoorlie Lions Train which you can find every month at the Boulder Markets, giving rides to children.  We also run the train at events such as Australia Day celebrations, trotting days at Cruickshanks, Christmas parties, Coolgardie Day and the Kalgoorlie Community Fair, amongst others.  Some of the parents riding with their children remember the Lions Train from their own childhood!!  It is a Kalgoorlie icon.

The club used to be very fortunate as it had its very own Lair or Clubhouse. The story behind the Lair which was named in memory of Pat O'Dea, one of the Club’s legendary members, is very interesting.

In its former life the building was the TAB at the Tower Hotel, which is across the other side of town. In 1973, the Club moved the whole building to President Street. Over the next three years the club members worked to reconstruct and refurbish the building and the Lair was officially opened in 1976. The Lair was used for all regular dinner meetings, and having a permanent meeting place allowed the club to display numerous bannerettes from Lions Clubs throughout Australia and the world. After nearly 35 years of service, the building was damaged in a fire and had to be destroyed.  Meetings are now held across the road from the site of the Lair, in the C Y O’Connor Community Hall, President St. 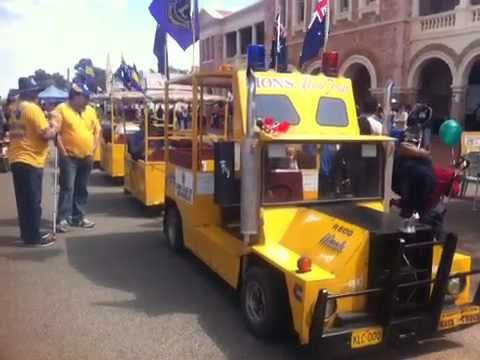 We are a community not-for-profit organisation in Kalgoorlie  and we serve our local community, assist neighbouring communities and helping with medical research, disaster relief and other humanitarian assistance around Australia and internationally.

We are the Lions of Kalgoorlie The traditional landowners of the Kalgoorlie area are the Maduwangka people and the name Kalgoorlie is said to mean "Silky Pear Bush" in the local aboriginal language.

European settlement of Kalgoorlie began in June 1893 with the discovery of rich alluvial gold deposits near Mount Charlotte.

By 1902 deep underground mining of gold leads had become the norm with the Great Boulder Mine continuing to discover payable gold 1500 feet below the surface.

Later Boulder Mining leases came to be known as "The Golden Mile" and by all accounts this area contained the richest square mile of gold reserves in the world.

Today the Golden Mile continues to be actively worked.

During the past 20 years the use of modern open cut mining technologies has seen the Golden Mile transform itself into a Super Pit.

Current dimensions of the "Super Pit" are 290 metres deep by 1.5 kilometres wide and 4 kilometres long.

We meet the needs of our local communities and the world.

Join us in making our communities and the world better places to live.

Lions club members are men and women who strive to make a difference in their local community as well as in communities worldwide. Their volunteer efforts go beyond the support of vision care, to addressing unmet health and education needs worldwide.

Welcome to our Lions Club!

Lions are people who get involved in humanitarian efforts locally, nationally, and internationally.

We welcome your interest and invite you to support or participate in our activities.

If  you would like to serve your community, through the many volunteer opportunities in Lions, here is a little more information about joining lions.